The fourth year death anniversary of my Mother dawns a bright beautiful sunny Autumn day in West Footscrazie. Having been driven batty by the intensity of work and the Wife's overwhelming feelings of being crushed into an inhumane blob by her lecturing position, we meditate... eat breakfast and decide to cycle down to Spotlight in Braybrook to feast on the wares On Sale.

A pleasant ride onto the edge of Braybrook... where one in 3 homes have burnt the grass in their front yard instead of mowing it. We cycle through the local parks where white children play hideous groups sports while nervous little Aths parents egg them on, then down streets where small brown people play in the streets, laughing and squealing with joy.

Spotlight is moving to Knifepoint.... oh what a hideous prospect. I have come in search of a new doona and Wife has decided we need new front curtains. All good, easy things to decide on. Also some lovely  Chinese print fabric. And some 750 count sheets... and, what about looking at the Vogue suit patterns for men? I think. Wonderful idea, say's Wife, being creative on your mother's anniversary.

I had seen recently, online, a pattern for Men's vests and suits that looked decent. I spoke to the sales lady behind the haberdashery counter. She directed me to the patterns area, with a look of slight concern, which I did not register until later. Happily I bounced off and chose some patterns, all looking a lot like this one.... 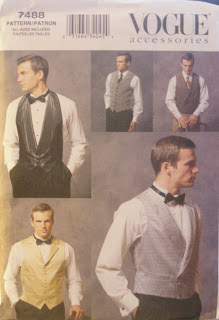 I take them back to the haberdashery counter. You may not know what TheLadyBehindThe HaberdasheryCounter is like. They are a dying yet magnificent breed, found in these stores like Spotlight, Clegs, DJ's discount fabrics.... She is the Queen of this particular little Spotlight Kingdom. She cuts the fabric off the Bolt. She has the keys to the display cabinet that houses the Enamel Paint Spray and can ward off chromers without even talking to them. She knows exactly where a size 12 knitting needle would be and can tell you which elastic to buy for your elasticised Simplicity pants. She also gets the patterns from special filing cabinets and advises on size, fit and general accessibility of the pattern.

TheLadyBehindTheCounter is concerned. What size do I require? Will it fit? Is the pattern for me? (at this point, Wife pipes up with "Yes... and she's got the hourglass figure!! I'm the one who is straight up and down!!") TheLady begins to look very concerned. Perhaps I should have a look at some other patterns that might be more to my liking? No, I reply, I am happy to try this one and see how I go. TheLady's eyes widen, but for now, she lets me go.

At this stage, would understand if you are a little confused... lesbians don't know how to sew, do they?

And why is TheLady concerned?

The truth is, dear reader, that I had forgotten certain things about the gender required at these shops, and I made a fatal mistake. I am butch... a progression that happened fairly quickly between when I was 8... 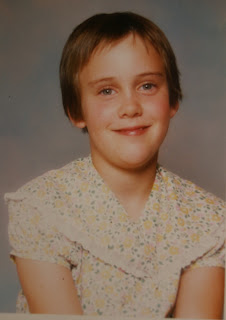 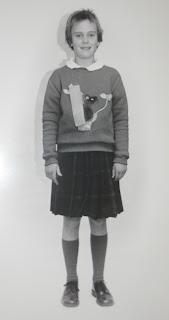 to when I was 12... and wore this dress my grandfather made for me... it was the last dress I ever wore, and I decided this at the exact moment this photo was taken. 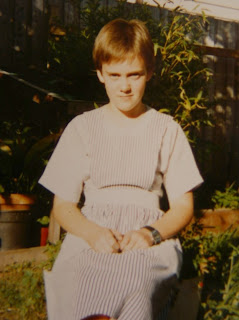 I forgot that I was butch. An easy thing to forget, I know. I also forgot that being butch, in a store like this, looking to buy men's suit patterns would be crossing a double line of femininity. Not making me more feminine, however I broke the rules. Twice.

This, TheLady knew down to her bones. When I returned the second time, to get yet another suit pattern... her distaste was showing in her eyes, her mouth had changed to an anus and she was sweating. She told me that I "shouldn't touch this pattern" and that it would "break my heart" if I tired to make it. The masculinity of the pattern would mean that I would need to  let out the fabric at the boobs and bring it in at my waist.

TheLady really didn't want me to have this pattern. I insisted. She grew angry. Sweat started to bead on her top lip and forehead as she locked eyes and wills with Sir's crazy bed haired flashing green eyes. I didn't back down. She ushered us over to the pattern book and shown a lovely backless shirt, a beautiful dress and some stylish pants that would go perfectly with a pussy bow shirt... 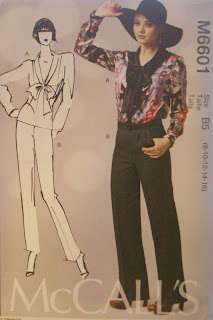 But I have never forgotten these things.

I grew up with home made clothes. I really did. Clothes from the Op Shop of hand me down clothes were a luxury. I convinced my grandparents to stop making my underwear by hand when I was 11. I stopped wearing the dresses that my grandfather made me when I was 12. I convinced my mother that I didn't need to wear MaryJanes to school after a horror first week in Yr 7.... I had just about passed as a boy (this involved only going to the toilets when no-one was around) and saved myself a year of torture by the class bullies, when she insisted that I wear a pair to school. This was not the queer friendly new century, this was the late 80's and there was no place for me. It would only be much much later that I would realise that my androgyny would make me desirable, that my cleverness and wit would make me fuckable and by wearing men's clothes I finally belong to a concrete, identifiable group... The Butch.

So I bought the McCall's pattern. along with the Men's suit patterns from Vogue, I sat through TheLady's lecture on Lady suits, because I knew she was angry and confused about my identity. My gender wasn't right, and certainly not right for a women who could make her own clothes!!

Wife was astonished. I have spoken often enough about heteronormativity and how it effects me, as a butch women. How I am denied service, looked at strangely, asked to leave women's toilets and frighten women already in there (because I look male I guess) eyed up on the street, avoided on public transport, chatted to by drunken men on buses because they think I am a male... or an accessible she-beast... etc etc etc. On it goes. But this morning at Spotlight certainly took the cake!! I wonder what would have happened if I had told her my first name.

So, Baby Butch grew up. To the delight of many.

I will continue to buy Men's Suit patterns, knit, sew and embroider and create whenever I can. TheLady's and many other's ideas on Gender can try to bind us, but the definitions of Masculine and Feminine are still pliable.

And as Wife said.... "A tremendous relief that you are no longer in a lacy collar... though I'd still love you if you were..."